Activating the healing power of your body 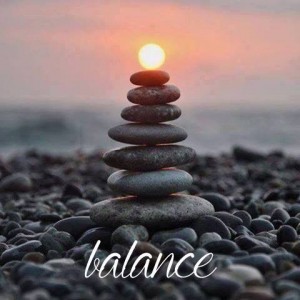 Our body has far more power to heal itself than we know.

The experience of transcending promotes balance in mind and body, creating the ideal condition to activate the body’s innate healing power. Fortunately this is easy to acheive – It only requires the right technique and proper instruction.

When the body can relax, stored tensions can unwind

Every experience we have will leave some impression that is stored somewhere physically in the nervous system. If the impression is deep, we can feel this clearly, for example, a “knot in the heart” when we have had a fight with somebody.

We could compare this with a blackboard. When we wake up in the morning, the board is empty but every experience that we go through throughout the day is like an additional little drawing. At a certain moment, the board is full and the nervous system can’t go on anymore. The board has to be wiped clean again. Fortunately, the body has a completely natural, automatic process to do so – when the body is at rest during sleep. So, relaxation literally means that tensions are relaxed and impressions are removed. The problem, however, is that there are too many impressions in our busy lives. The rest during the sleep is not sufficient to remove them all.

Also, the rest during sleep often also does not seem to go deep enough to eliminate deeper impressions – for example, that knot in the heart after we had a fight with someone. The next morning, we might feel that the tensions are a bit less but they have not disappeared completely – the sleep was not sufficient.

Those tensions, which cannot be neutralised through the rest provided during sleep, will accumulate over time. Eventually, they disturb the natural functioning of the body, which, in turn, results in all sorts of mental and physical problems. These disturbances can manifest, usually through our genetic “weakest link” – some people will get heart problems while others will sink into a depression. But the genetic condition is not the cause, rather it will define where the true cause, the inability of the body to clear itself of elements that disturb it’s natural functioning, will manifest itself. These disturbances are regarded as a key cause, direct or indirect, of many physical or mental health problems.

During the experience of transcending, the mind gets in a state of complete inner silence – see Being Your Self. Mind and body always go together. Where one goes, the other must follow. By allowing the mind to be effortlessly drawn to this complete inner peace, we literally pull the body into a very deep state of rest, much deeper than the rest that we experience during sleep. This can easily be measured objectively.

Rest experienced during TM is deeper than that obtained during sleep.

A study from Harvard Medical school in which the resting state is measured on the basis of oxygen consumption showed that during TM practice, the body goes into a state of rest much faster and much deeper than the rest that is usually achieved during sleep. This remarkable study was published in 1971 in two well-known scientific magazines, Science (Science 27 Vol. 167 no. 3926 pp. 1751-1754 1970) and Scientific American (Scientific American 226:84-90 1972).  It was repeated several times around the world with similar results. A later publication of a larger analysis of 31 TM studies confirmed the exceptionally deep state of relaxation attained by practicing TM – a state a lot deeper than that gained in normal, eyes-closed rest whether measured through breath rate, heart rate or plasma lactate (American Psychologist 42: 879–881, 1987). 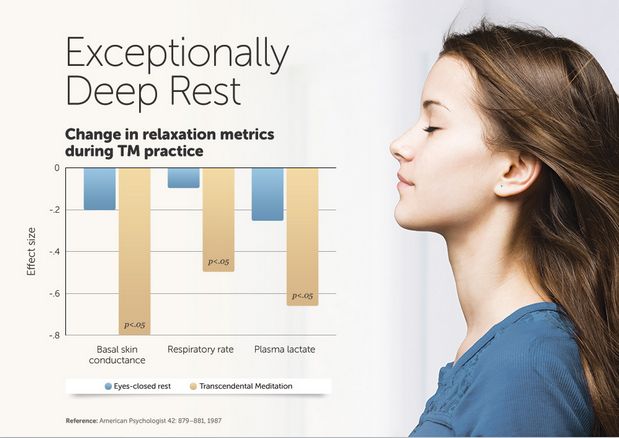 As a result of such deep rest, the body can start to heal itself from the deeper stresses – even our deepest traumatic stresses – that years of sleep (or therapy) can’t touch. If the body can eliminate the tensions that disturb its normal functioning, then the ground is set for the problems related to those disturbances to spontaneously improve.
Some of the most impressive effects, however, were found with people who also had the deepest problems – war veterans and refugees who were suffering from severe Post Traumatic Stress Disorder (PTSD). The deep-rooted, traumatic stresses implicated in PTSD are generally considered incurable and, in some cases only, the symptoms can be suppressed with therapy or heavy medication.
Yet, a number of published scientific studies have suggested a highly significant decrease or even complete disappearance of PTSD symptoms, in some cases after only 4 to 12 weeks of TM practise – for more info see Transcending provides relief from PTSD. The subjects of these studies have been exposed to the most intense stress and traumas. These studies indicate the true power of our bodies to heal themselves we if only we can activate that power. It’s reasonable to assume that, if through TM practice, such deep traumas can be relieved, those suffering from lesser degrees of stress and trauma can also find relief.

Stress is a vicious circle. The more stressed we are, the easier we will gain more stress. Under stress, we more easily lose our balance, get into arguments or fights, and become even more stressed. Stress also blocks creativity, making it more difficult to find solutions for problems. Being faced with a problem that we can’t solve is just one more stress to add to the pile!

Transcending can help to turn this circle around. If the body starts to remove stress, it can start to function more normally. More normal functioning means that we spontaneously remain more calm, more ourselves. Rest neutralises stress. So, if we can remain calm continuously, stress will simply make less of an impression on us. The body will become more and more efficient in removing stress, not only during meditation but even during what is ordinarily stressful activity. It is like drawing a line on water – while we draw it, it is automatically removed.

We can measure the impact on stress objectively. Studies show that Transcendental Meditation practitioners will, after an average of 3 months of regular practice of the technique, also remain a lot calmer outside their meditation, as measured by 4 different variables:
– Heart Rate,
– Oxygen Consumption,
– Galvanic Skin Resistance and
– The Stress Hormone, Plasma Lactate.
(This study shows the average values of the effect of 31 different TM studies, American Psychologist 42: 879–881, 1987) 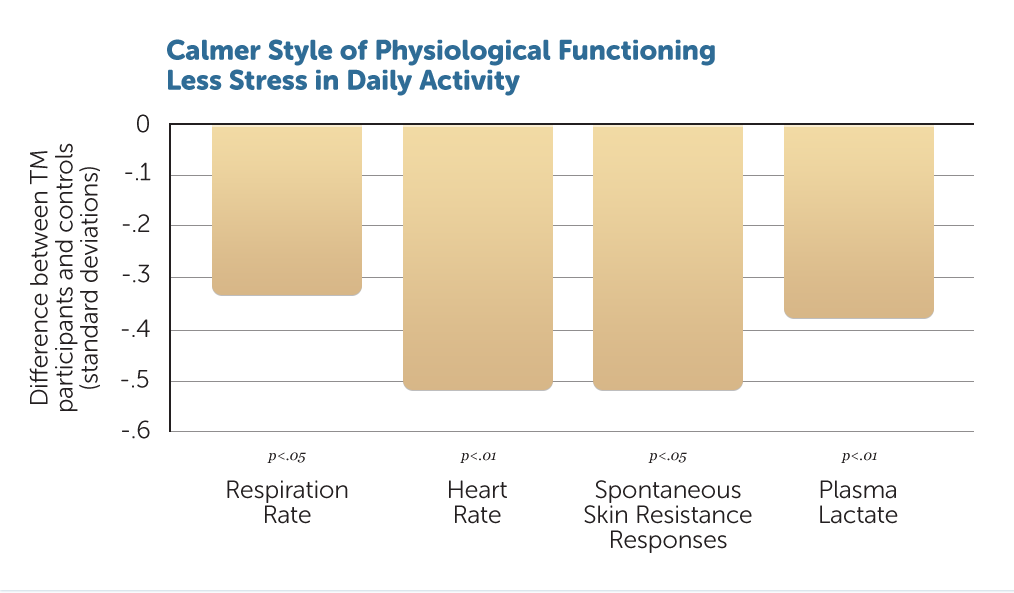 If TM practitioners are exposed to a stressful stimulus, studies show that they also return to balance a lot faster. One can objectively measure how big a person’s resistance to stress is and studies suggest that transcending has a strongly positive effect (Psychosomatic Medicine 35: 341–349, 1973).
Reduction of stress, in itself, is actually a side benefit of what really happens – we get back in contact with our true inner nature and everything inappropriate starts to melt away – see Transcending = the Highest Human Experience.
For more scientific research on the effects of Transcendent Meditation on stress reduction go to the Evidence section.