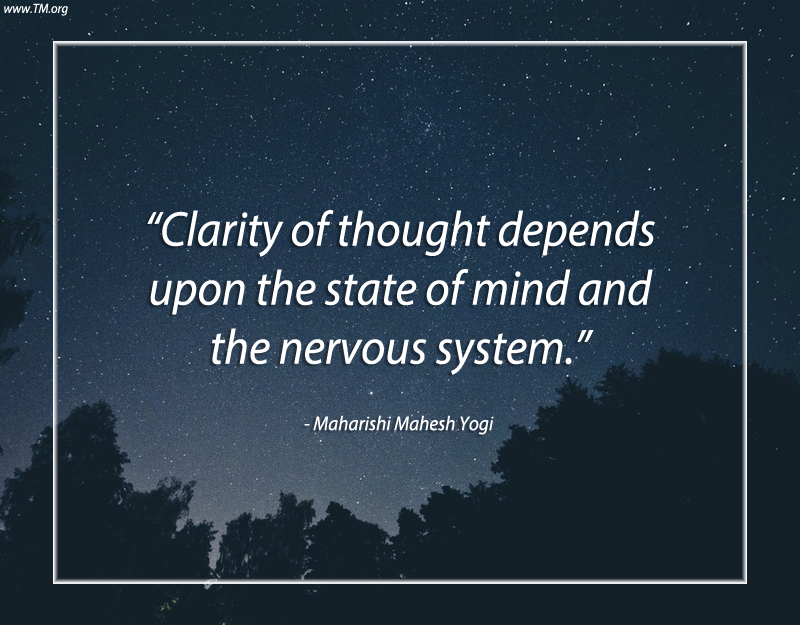 “We are born with our brains unassembled. Throughout the first two decades of life, both nature and nurture combine to build brain circuits that are capable of supporting increasingly more abstract levels of thinking and being. What is the limit of this development? Do most of us reach the limits of our potential? Or are there abilities inherent in the human brain that most of us don’t realise?”
Your Brain is a River not a Rock, Dr. Fred Travis. ISBN-13: 978-1469937212. Page 198.

The brain is like a muscle. When we train it, it becomes stronger, if we neglect it, it will shrink. We only use a small part of our brain’s potential. Education has not provided us with a means to develop our full brain potential. The means is transcending.

Every experience that we encounter stimulates a part of our brain. When we see something, the neurons in our visual cortex start making all kinds of connections and, thereby, as a network increase in strength. If we only have local experiences (for example, we see what’s inside the room, but not what’s outside of it), we only use a local part of our brain. Other parts are not activated resulting in the requisite connections not being made and as a consequence the neurons start to die.

“If we continue to have the same types of experiences, our brain circuits will remain at the same levels of development. Experiences that transcend or “go beyond” concepts and language use new brain circuits, unfreeze brain development and allow our inner reality to grow…since it is fostered by transcendental experiences it would develop our ability to see beyond the usual boundaries of personal, national and local concerns. The inter-related reality of all peoples would be primary; differences and divisions would secondary. Actions and thinking…would be more unifying and supportive of all parties“
Your Brain is a River not a Rock, Dr. Fred Travis. ISBN-13: 978-1469937212. Page 198. 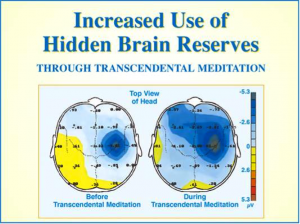 Transcendence is the experience of the united source of all there is. It is a non-local experience, a bit like an individual wave melting into its source, the infinite ocean – see in touch with our higher self. In modern times, the effect of this experience on our brains can be measured through a variety of brain-imaging systems. This experience affects a much larger part of our brain, including the so-called “hidden reserves” (Human physiology, 25: 171–180, 1999).

Every time a part of the brain is active, there is an electrical activity that can be measured with an electroencephalogram (EEG), an instrument visualizing information as waves. The EEG waves of different parts of the brain are then sent to a computer that, in real time, calculates the extent to which different waves overlap, i.e., display coherence. If the brain waves are fully coherent, this implies that the different parts of the brain are connected to each other. They function as one whole.
During normal activities, this coherence is quite low, somewhere between 30 and 40%. However, through transcending, the mind experiences a state of unity and this has an immediate, measurable impact on the brain. The brain starts working more as a unified whole. The video below shows this process taking place in real-time.

By regularly experiencing unity, we stimulate the brain to more complete growth. 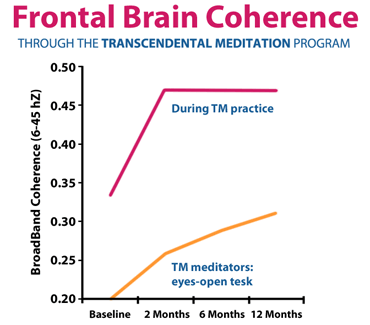 The more someone experiences high EEG coherence, the more the brain gets used to this state. This results in increased EEG coherence outside of TM practice (Travis, F. and Arenander, A. International Journal of Neuroscience, 2006).

This graph shows the evolution of the average EEG values of 50 students over the course of 12 months.

It also shows that there is no difference between EEG coherence during TM exercises for someone practicing it for 2 months as compared to someone who practices it for 12 months.

As the experience of transcending is a fully natural process, one can transcend from the very first practice. However, we do see a difference during the activity outside of the TM practice – the increased EEG coherence becomes more stabilised.

Over 30 years of research on EEG coherence suggests that what is good in our brains improves if the brain is able to function in a more coherent manner, more as one whole. IQ and creativity increase, the ability to learn increases, concentration improves, emotional stability increases, impulsiveness decreases and people have better ethical behavior towards others. Some studies suggest that even ADHD symptoms, which have been linked to exceptionally low EEG coherence, spontaneously decrease.

In essence, EEG coherence is a way of objectively measuring how the qualities of unity can be increased in our consciousness – the qualities described in in contact with our higher self such as creativity, intelligence, love, peace, etc..
Normal relaxation has little effect in terms of increasing EEG coherence. These levels of enhanced EEG coherence are really a function of the experience of transcendental consciousness. The TM technique has a much stronger effect on improving intelligence, creativity and school performance than other forms of meditation.

Development of our full potential

If we were to buy a new laptop only to discover that it worked at 10% of the advertised speed, we would not find this acceptable. We’d bring it back to the shop and demand a repair or upgrade. But, if no one realised the real potential of the computer and everyone’s laptop worked at more or less the same slow speed, then that same 10% would be considered “normal”.

Throughout the centuries, wise men and women have appeared who have “advertised” the real potential of humanity and the human nervous system but the practical technique to realise this potential was often not available or was quickly lost. Maharishi always said that experience captured by Transcendental Meditation is nothing new and that it can be found in the traditions of many cultures (The Supreme Awakening. Dr. Craig Pearson. ISBN. 978-0-923569-52-5. This book is a remarkable collection of transcendent experiences reported by people throughout the ages and across a wide range of occupations and cultures).

The documented benefits of the practice of the Transcendental Meditation technique include improved health, being more in touch with oneself, improved relationships, improved intelligence, more personal and professional success.

These are all side-benefits of what is really taking place, i.e., growth towards the development of our full potential, growth to a state of life in which the qualities of transcendental consciousness – rest, peace, happiness, love, infinite creativity and intelligence, to be connected – are permanently present in everyday life. This is a state described by Maharishi as “invincibility” – see in contact with our higher self.